How much does a patent cost? 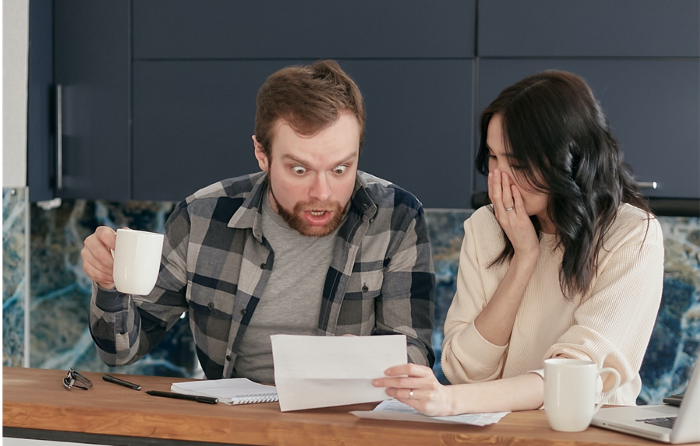 If you’ve ever asked “what will a patent cost?” then you probably got one of the following as answers.

And, to be fair, those answers are correct (apart from maybe the last one!).  But what use are they to a tech business trying to plan a budget for IP spend?!

So let’s try to do better. Let’s set it all out here and get you a number. A number that you can use to plan your budget. And that can help visualise the cost and the timeline so you can understand the level of commitment and how it might map onto the journey your business is on.

We‘ll start at the end. The number is…drum roll please…£50,000 over 6 years per invention.

There are so many assumptions made in getting to that number that only two things are certain. The number is wrong, and the timeframe is also wrong, but they’re both good enough for what we need.

The response I usually get when I tell business leaders that a patent will cost them £50k is “that’s a pretty big number”. And it is. Obtaining patent protection for your inventions should not be entered into lightly.

As my good friend Will Chelton said on my podcast recently, “it’s a brand new Tesla.” The question he also posed was “would you buy a brand new Tesla, just leave it shut in the garage and never use it?” Of course, the answer is no, but if you don’t do anything with your patents that is, in effect, what you’re doing. You’re investing £50k as a business in a patent then shutting it in a metaphorical garage and doing nothing with it. The fact that the asset is intangible in this case means that is not always realised.

There’s another blogpost I’m planning to write on how you can effectively commercialise the patents you’ve invested in. 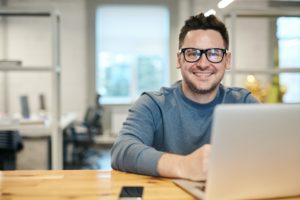 Breaking down patent costs over time

So we have our number – £50k. But there’s a lot more to this than a number, a pretty big one or not.

That £50k isn’t evenly distributed across the 6 years. Different costs will appear at different times and, generally speaking, a majority of the costs come after 2 and a half years. We can look at that in more detail.

The image below shows a typical patent application process. The details are not so important here, but it assumes that protection is sought in Europe, the USA and one other country, in this case China. This is a pretty typical set of countries for a tech business. 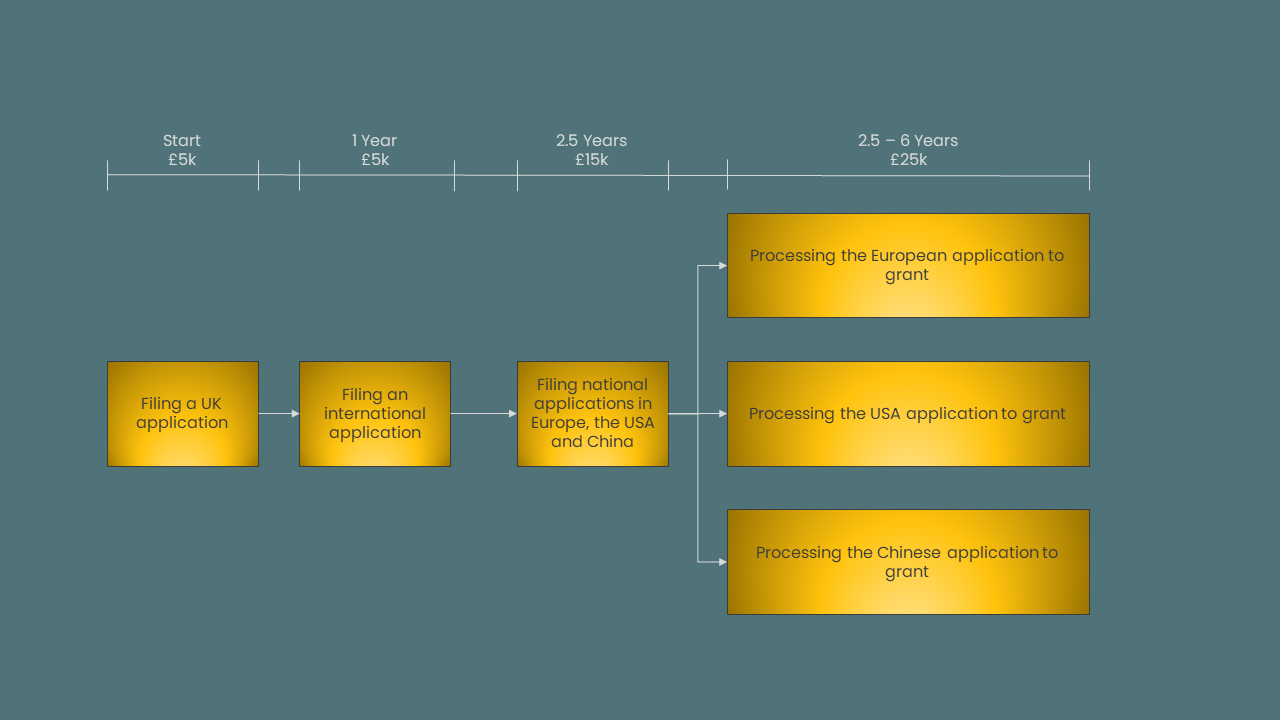 What you can see from the image above, but you can see more clearly in the chart below, is that most of the costs come after 2.5 years. It’ll cost around £10k to get you to 2.5 years and then you’ll pay around £40k from there onwards. 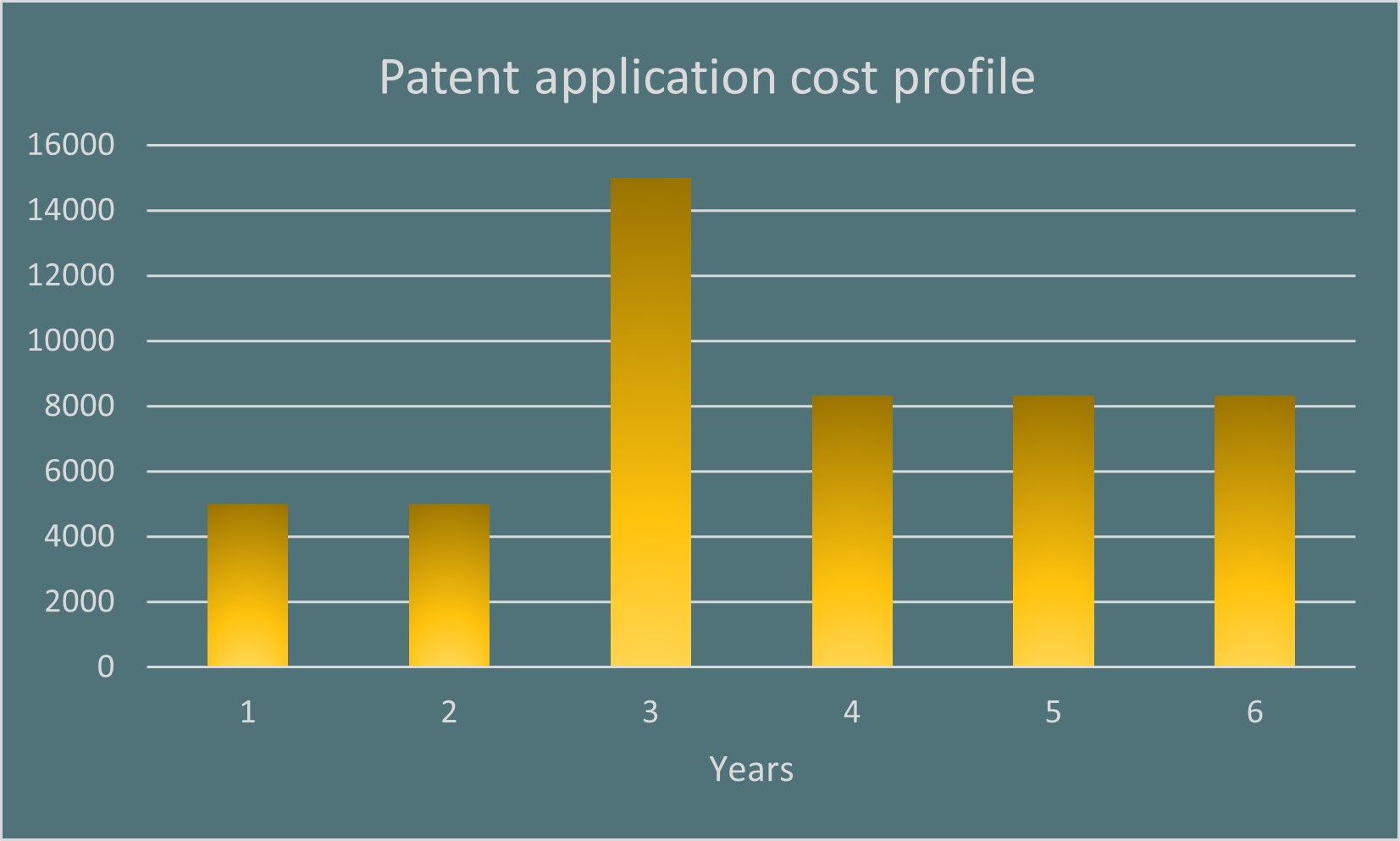 This distribution of costs is something often used by universities in their IP strategies. A university will happily file an application on behalf of an academic. They are often filing a high volume of patent applications so are able to drive down costs with their patent attorney (something the downtrodden SME is unable to do). The lowest I’ve ever seen for a university to get a patent application drafted is £2k, but more typical would be £3k and upwards. They will then also file a PCT application after a year.

This means they have paid around £7–8k to buy themselves 2.5 years in which to find a licensee for the technology before the costs start to get bigger. In my experience, many universities will drop the application at 2.5 years, if there is no obvious licensee.  Of course, the most obvious licensee is usually the academic and original inventor who span out a company.

The same cost distribution can be used by a tech business on a path towards investment and acquisition to understand what costs they’re committing to down the track, and indeed whether those costs fit with their commercial plans for the business. More on that below.

The cost data above is just for going through the patent process for one invention.  But that is not really practical and probably not a good strategy for any business. If you’re going to file patents then you should probably be planning to file a few a year. Then the cost profile gets more intimidating.

The chart below shows the cost profile over the same 6 year period for a patent filing strategy for 2 new inventions per year.  That’s not unreasonable for a medium sized or scale-up technology business. As you can see, in this scenario the annual patent costs by year 6 are at £100k.

I’ve seen a few businesses be caught out by this in the past and reach a point around 3 or 4 years into the process where they feel like they are getting chunky invoices every other week and that costs are spiralling out of control. They usually end up trimming back considerably and dropping cases, which means that a lot of the money they’ve invested up to that point is lost. 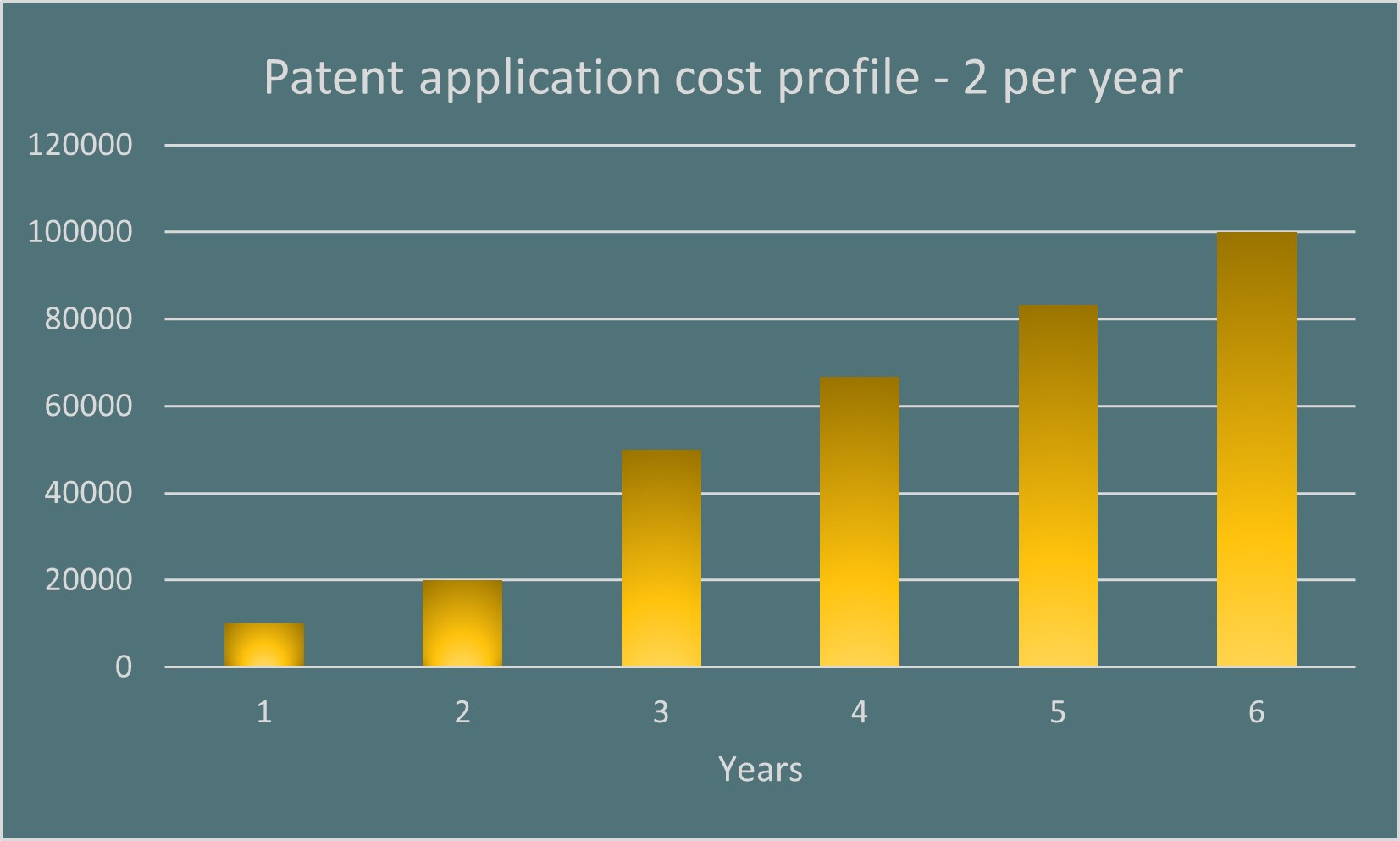 Fitting to your commercial timeline

Depending on your plans for the business, it’s worth bearing in mind the cost profile of your overall filing strategy.  How does it align with your commercial timeline and where you expect the business to be in 2, 3, 4 or 5 years?

If, for example, you plan to exit within 3 years then you need to understand that by that time you may be budgeting upwards of £50k annually for your patent spend, and if the exit doesn’t materialise in that timeframe then, by the following year, it’ll be more like £65k.

When you’re raising investment, also bear these costs in mind so that you raise enough capital to do everything you plan to.

If you’re looking to commercialise your technology and drive revenue from it then understand how much revenue you’ll drive from a particular invention so that you can understand whether the cost benefit analysis stacks up. Would you be able to drive the same revenue without a patent? What would be the implications if your competitors were able copy the technology?

You might also consider dropping patent applications at that 2.5 year mark before they become too expensive.

Difficult but not impossible

So yes, the cost of filing patent applications has many variables. It is difficult to say how much it will cost. And it does depend on a lot of factors.

But with some experience and a bit of business thinking, it is possible to arrive at useful numbers that can help you budget properly, understand what you’re getting into and make sure it fits with your commercial plan.

NB — It’s worth noting that the costs mentioned here are the pounds and pence only. I’ve not mentioned the opportunity cost of tying up your people’s time, or your own time in managing the process, which is not trivial when you get a decent sized patent portfolio.

On top of that, renewal fees for granted patents need to be paid annually. These can mount up and can end up doubling your patent spend.

Talk to us to see how we can help 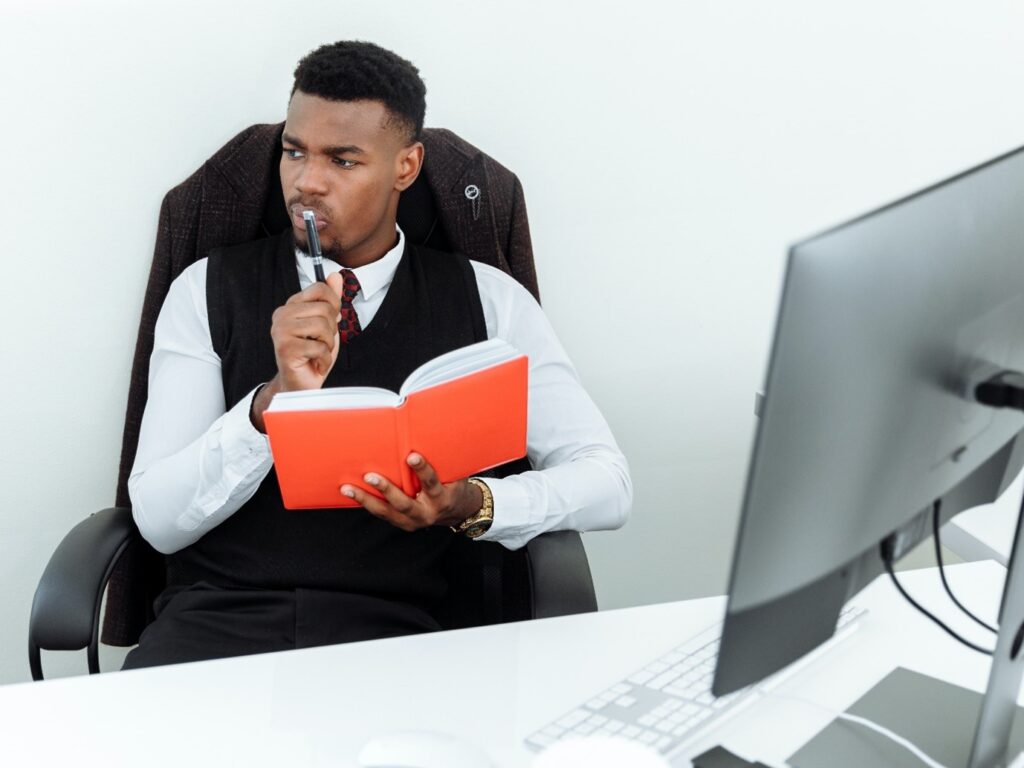 How to choose a patent attorney 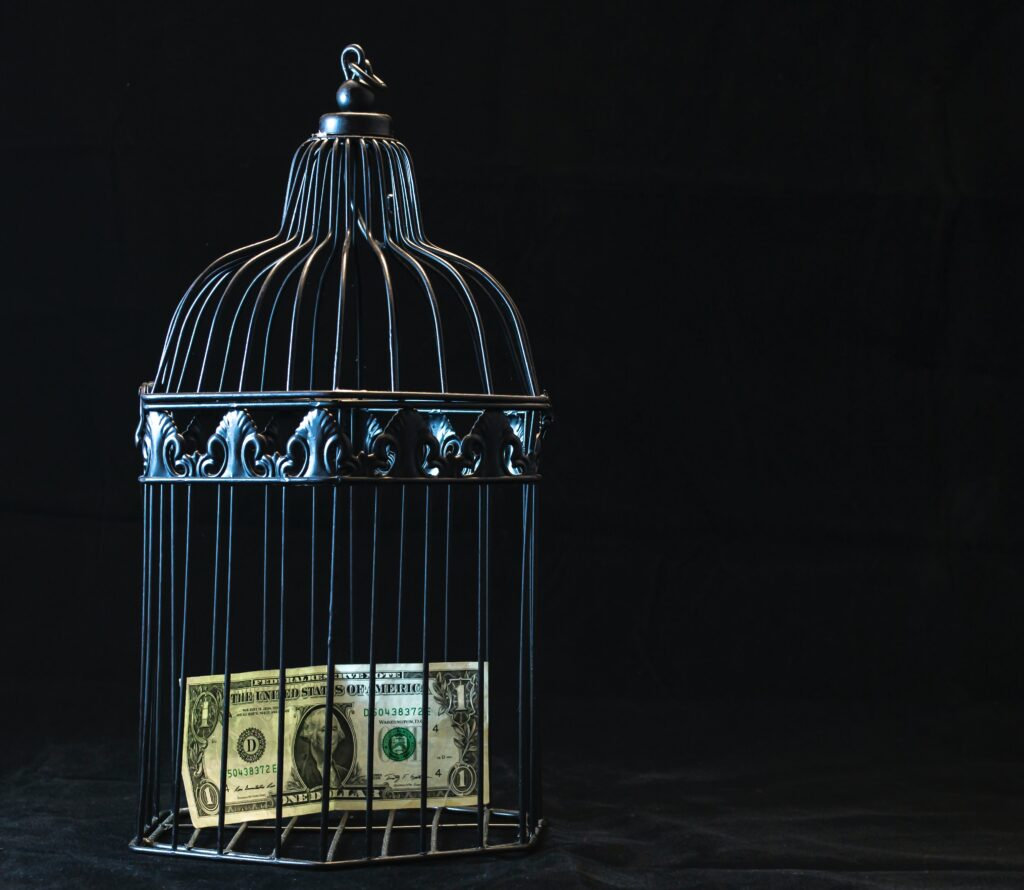 What VCs look for when it comes to IP 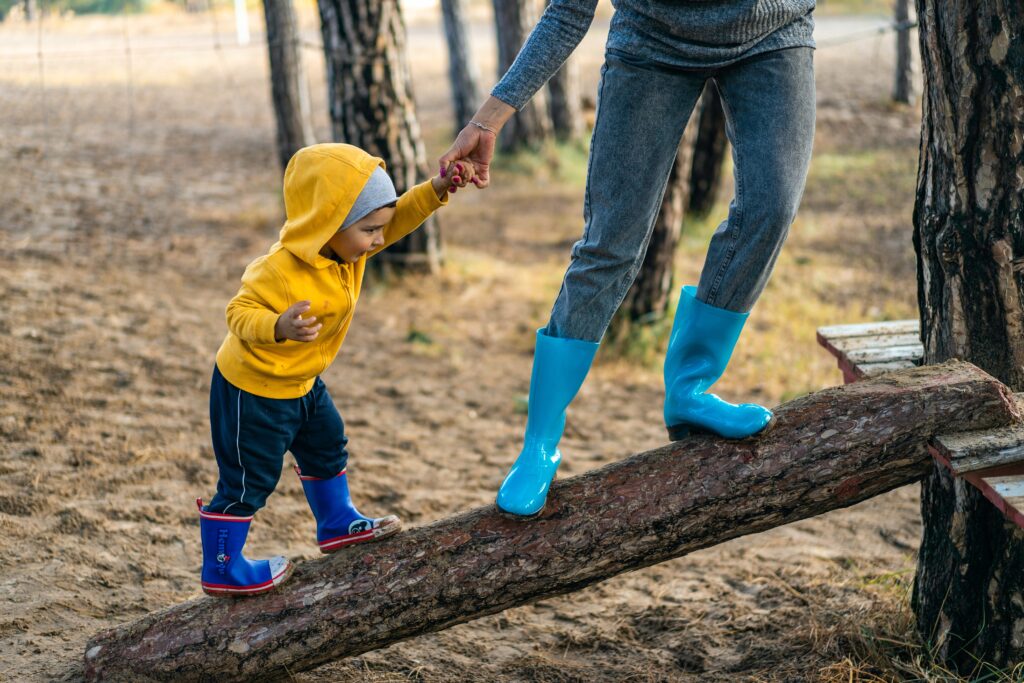